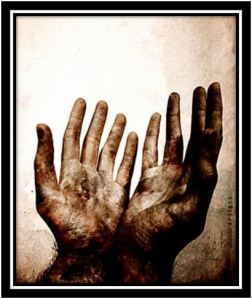 Hey, I just got a call … hop in.  I want to take you over here a ways to check out a subject that keeps showing us his hands.  Bring your ‘mind’s eye’ and we’ll talk as we pull this call.

Beginning early in the Academy we’re taught: watch his hands.  Keep his hands where you can see them.  What’s he doing?  Watch his hands … your very life may depend on it.  I want to take you over here a ways to check out a subject that keeps showing us his hands.  I guess he knows to keep his hands in plain sight, but there’s more to it than that, I think.

There…that’s him, the dark-headed one with the beard…let’s stand back here for now and watch a minute.

Watch His hands…they look fairly ordinary hands to me.  Now that I see them closer, they look rough, like a carpenter’s hands, maybe.  Yeah, I remember now…that’s how He made His living as a young man.

What’s He doing?  Watch His hands…He’s talking with children.  He’s laughing with them, telling stories, giving hugs and drying tears.  He’s placing his hands on their heads and blessing them.  Are they priest’s hands then?

Watch His hands…There’s dumb ole Peter, thought he could walk on water.  Uh oh, looks like Pete’s about to drown.  But wait…His hands again…reaching out; grabbing Peter and bringing him into the boat.  Are they a friend’s hands then, or are they more than that?

Now what?  He’s coming over to a blind man.  Watch His hands…He may try to rob him. What in the world?  He’s making mud and putting it on the blind man’s eyes.  Amazing! The blind man can see again!  Are they a healer’s hands then?

What’s that in His hands now?

A basin of water?  What’s He going to do with that?  He’s washing those men’s feet and drying them with a towel.  Are these a servant’s hands then, or something more?

Watch His hands…Oh no!  He’s being beaten.  But He keeps His hands at His side…in plain sight.  He’s not fending off the blows.  Why?  What’s going on here?  These are certainly not the hands of a coward.

What’s happening now?  Watch His hands…those soldiers have thrown Him down on a cross made of wood and now they are driving big spikes through His hands.  Wood and nails; the raw materials of a carpenter.  The hands that once shaped wood now nailed to wood where they’re plain to see.  These hands, this wood, these nails…He is about to use these to build something no mortal carpenter could build.

Watch His hands…it’s several days later now and He’s showing His hands to His friend Thomas.  Showing them to him to prove His identity.  So that Thomas’ faith will be strengthened.

Look.  He’s walking over toward us now.  Watch His hands…what’s He have in His hands? They look empty to me…no…now I see…they’re full of love.  Love and something else…a scar.  Love in the form of a scar.  He’s showing us His hands so we can plainly see what He’s been up to.

A Carpenter’s hands.  A Priest’s hands.  The hands of a Servant, a Friend and a Healer.  Blameless hands that have been pierced by nails.  All to demonstrate to everyone how much He loves them individually.

Now, what are you going to do with these hands?  This Subject?  Say “it’s a civil matter” and drive away?  Say “He’s just a man,” then cuff these hands behind His back and stuff Him out of sight in the back seat?  Or reach out and touch that scar, and say, “You did this for me?”

To experience salvation through faith in Jesus Christ, or for more on this topic please read these related posts or contact us today: CoveredLawEnforcement@gmail.com.

Many thanks for this very inspirational guest blog post: